Continuing my monthly movie summary, here's a run-down of some of the movies I watched in August 2021. I watched 34 movies this month, taking the total for the year to 259.

A few of the top movies this month were based on true stories or set amongst historically important events.

Dangal is a story about the Indian cultural preference of boys over girls and how a father helps train his oldest girls to break in to the male-driven sport of wrestling. The story does well of introducing the disappointment of having girls but then focuses on how that is transformed. It showcases a difficult line between supporting and wanting your children to succeed and a potential selfish motivation of fulfilling your own dreams. There are so many layers to all the characters, conflicts, redemption and reward. The acting is top-notch and the cinematography stellar. There are only a couple of songs in this Bollywood story and I would recommend everyone watch it. Personally, this movie really resonated with me as a young father starting my own journey.

Kahaani is another Indian movie, which follows a pregnant woman trying to find her missing husband. There is a culture-clash and a lot of things aren't quite as they seem. This is a fantastic thriller which builds suspense and intrigue. Each lead seems to end in an abrupt stop but slowly the story comes together. The movie would do really well with a Hollywood remake, similar to that of Infernal Affairs/The Departed, but until that happens, definitely check this original movie.

‘71 is set during “The Troubles” in Belfast. This movie never gives you a moment to breath. Each step and every action has dire life-or-death consequences. The setting is fraught and the characters unforgiving. It’s gritty, relentless, and brutal but most of all masterfully suspenseful. Really extraordinary film-making.

Hotel Mumbai focuses on one aspect of 2008 terrorist attacks in Mumbai. The graphic and real-life depiction of the horrors is very graphic and can be difficult to watch. This conveys a definite sense of being powerless. Between the hopelessness, there are moments of humanity between people of different walks of life. Overall it's definitely worth watching if you can stomach the very real violence. 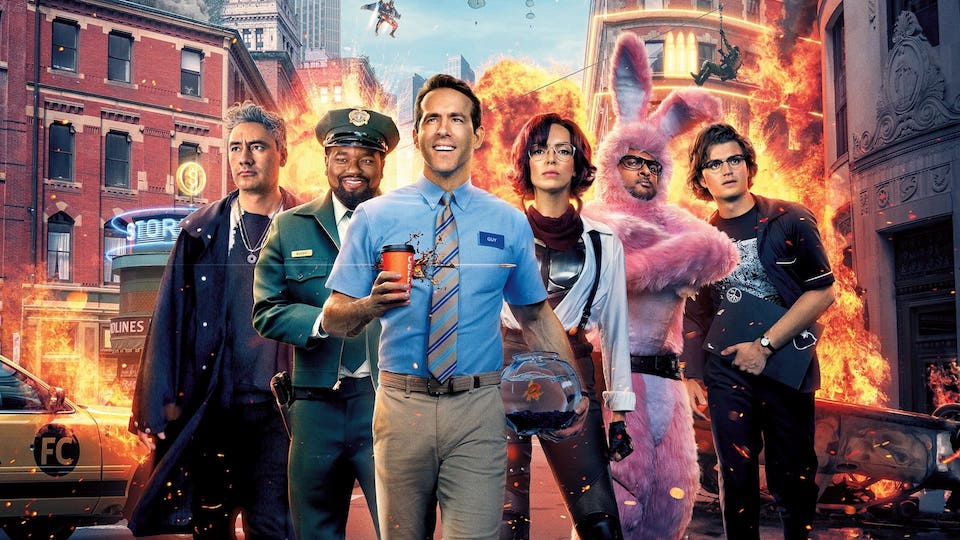 Free Guy is the much delayed Ryan Reynolds’ epic action movie. It's the type of movie best experienced at the cinema (hence the delay) – which I did. It’s loud, colourful and action-packed. There are explosions, gun-fights, fist-fights, good comedic timing and plenty of pop-culture references. The plot is simple enough but manages to mix the real world with the computer game world well. It's the type of movie which anyone would enjoy and an easy choice if you want some entertainment.

CODA centers around a deaf family and follows their only hearing member; their youngest daughter. She is torn between following her passion – ironically music – and helping support her family. The unique story is intimate and deals with an interesting dynamic; instead of being encouraged to leave the nest, the daughter feels trapped and like she is abandoning her family. There are some special moments and the final few scenes will have you close to tears.

I watched two movies which mess around with time. Firstly is Boss Level which is a time-travel action movie. The protagonist wakes up as he's being attacked, but he managed to know every move off-by-heart. His life is restarted from the same point every time he dies. As an assortment of distinctive assassins try to kill him, he must fight for his life, to give him enough time to figure out what is going on. It's a big dumb fun action movie. The premise is similar to Source Code but a lot more over-the-top.

Secondly, Don’t Let Go is not your conventional time-travel movie. This thriller features a cop who can communicate with his niece using is phone, but he is talking to her seven days in the past. They must work together to solve the mystery of her killer before time runs out. The concept is interesting, mixed with a crime drama and there are many twists to keep you guessing.

If you like unconventional movies, then there are a few I would recommend checking out.

Odd story with odd characters and odd haircuts. Weird setup, bizarre twists and gory flashes. Takes unexpected turn after unexpected turn. It has good cinematography and keeps you guessing throughout. This won’t be to many people’s taste but has qualities that’ll please those who like movies that are unconventional.

If you're a horror fan, then you should watch No One Lives. This is a no-holds-barred brutal and gory movie. Both sides are pretty evil and there a lot of violent moments. Although it's a bloody affair, there is a small amount of depth to give some context to the kidnapper and his relationship to his captive.

The Vast of Night, set in 1950s small town America, follows two kids as they investigate strange audio signals. The aesthetic is outstanding. Set mostly at night, it is stylishly lit with muted tones that suit the era perfectly. It's billed as science-fiction, but it's very dialogue heavy as they learn more about the strange phenomenon.

I watched two movies back-to-back which are primarily focused on one-character and from a self-contained location. Wheelman has some inventive camerawork as the main character drives around a city, trying to escape criminals who he has double-crossed. Aside from two very short scenes, everything takes place within a few different vehicles. The short run time helps the movie never overstay the concept.

Next was 7500 which Joseph Gordon-Levitt stars as a co-pilot trapped in the tiny confines of the cockpit of a commercial flight as it's hijacked by terrorists. There are numerous emotional connections which drive the story – a father, a son, a lover – and feed upon the dreadful personal sacrifices verses the greater-good.