Modern keyboards have limited space to display characters which users will use on a day-to-day basis. This restriction of characters has lead to widespread glyph substitutions, such as three full stops (or periods) instead of the correct ellipsis. When writing quotations, it is common to find straight single or double quotation marks, however these should be replaced with the appropriate left or right typographic quotation mark glyphs. Because keyboards lack these subtleties, applications can (in some cases) automatically convert glyphs, this is common for turning so-called dumb quotes in to smart quotes. Infact, I use a PHP port of John Gruber’s SmartyPants, which “easily translates plain ASCII punctuation characters into smart typographic punctuation HTML entities”.

Although these special glyphs do not appear on your keyboard doesn’t mean you can’t type them. There are multiple methods to help you output the correct glyph, below are some of the methods I use.

For more obscure glyphs that I do not need to use on a day to day basis and therefore aren’t worth remembering, I use a couple of different methods.

The main method is the website CopyPasteCharacter. A very simple idea; simply click the glyph you need and it’s automatically copied to your clipboard. It doesn’t have an exhaustive list, but I rarely need to look anywhere else. There is also an iPhone app so you can easily get these glyphs on your iOS device.

You don’t need an iOS device or a native application to get a wide range of glyphs on your mobile device. Neven Mrgan has developed a website which acts as an app on your device, even working with no Internet connection. Simply go to Glyphboard and add it to your home screen.

iOS devices (and I guess any device with software keyboard capabilities) have a clever keyboard system. The majority of a standard keyboard’s keys can be found within two taps, by default you’re shown the alphabet (in the common qwerty layout), tapping “.?123” gives you numbers and common punctuation characters, and tapping “#+=” gives you access to even more.

Using two taps you have access to 71 (26 + 25 + 20) characters. But there are more. Hidden away. A long tap on almost every single character gives you access to related glyphs. Doing this under the alphabetic keyboard gives you the appropriate diacritical marks for that letter. A similar behaviour can be found with the punctuation marks. A long tap on the full stop (or period) character shows a popup which includes the correct ellipsis glyph. This works similarly for both single and double quotes. (Note, not all characters have this functionality). Check out this article which has more examples of iOS keyboard shortcuts.

Tip: When you’re entering a web address, the popup functionality is also available for top level domains (TLDs). Simply long tap on the “.com” and you will get a popup with a list of common TLDs. 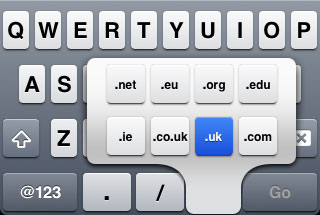